Studies reveal that asbestos contains materials that have fatal health effects. As they pose health hazard, the use of asbestos for sheeting or its use in any construction has been banned now. However it was used widely between the 1940s and 1980s. 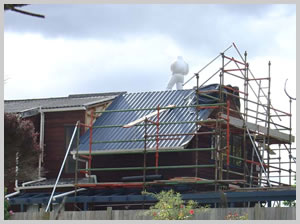 In fact, it was one of the most prominent product that was used in over 5000 construction material or product used in this industry. Asbestos has a chemical composition that allows the material to break down easily into very thin fibres. If these break down they can be identified only using a microscope at it would be about 700 times smaller than human hair.  When the asbestos sheets or any other product that has been made using this breaks down, these thin fibres circulate in the air for days and can be easily inhaled. When it reaches the person’s lungs it can cause severe effects. OneOne of the main reasons why it has been banned is because, these fibres are considered to be virtually indestructible as they are resistant to heat and most of the chemicals. This makes it a very environmentally stable one and one of the best insulators.

As per law, any material that contains asbestos (ACM’s) is divided into 2 groups: Friable and Bonded.

This is the most common type of asbestos which is found in buildings that were constructed between 1940 and 1980’s. Few of the products that fall under the categories are:

Only people holding ‘B’ class licence are allowed to remove the bonded asbestos of 10m 2 or more. This license is given only to the applicants who have experience and also demonstrate skill removing bonded asbestos as per the asbestos removal code.

Friable asbestos can be easily broken down or reduced to powder, even by hand. They are commonly found in the following products:

Removal of friable asbestos can be done by anyone who holds a license to remove asbestos as per the asbestos removal code which requires an ‘A ‘class licence.

Where is asbestos found?

Prior to 1990s, it was common site to find asbestos in most of the dwellings like residential buildings, workplaces and commercial buildings. However, after the ban, new installations have not been done, but there is a possibility of second-hand items being installed. Apart from this, it can be found in products that provide friction like brake disc pads, elevator brakes and so on. However, it is not possible to identify the presence of asbestos by looking at a product. It has to be analysed in a laboratory. While going through the labels of any products, if it says that it contains asbestos, one should consider the presence of it.

Prior to 1980s asbestos was most one of the major contributor to the building industry and it was used in almost every commercial building. They can be found in the cement sheeting, pipelines, insulators and many such places in our commercial building. Only after it was recognised to have health hazards new installations were banned.

Houses and other dwellings:

The flat sheets used for roofing mainly contained asbestos. Further, it was also used on walls to provide insulation. In most cases, painted fibres do not pose any threat. But that is not the case in other uses. In fact, the thermal insulations and acoustic insulation is contained friable asbestos which will get easily broken into minute particles with minimal impact. This posed great health issues. For this reason alone, the law states that friable asbestos should be used only by a person who holds an ‘A’ license for removal after 1 Jan 2006. This license is given only to the applicants who have experience and also demonstrate skill removing bonded asbestos as per the asbestos removal code.

To discuss your job over the phone please call:

NSA ROOFING: A family business owned and operated by Andrew Gardiner has been established in Brisbane more than 10 years and specialises in New Roofing, Roof Replacement, Asbestos Removal and Tile to Tin Conversions.